In 1994, Dave and I modeled for a painting. An artist we met in college, Erin Scott, asked me to model for her. She was a figurative artist who was doing realistic style paintings of people in tense situations. There were often weapons in the composition. She wanted me to pose with someone else, but when she found out Dave and I were a couple she was delighted to include him. 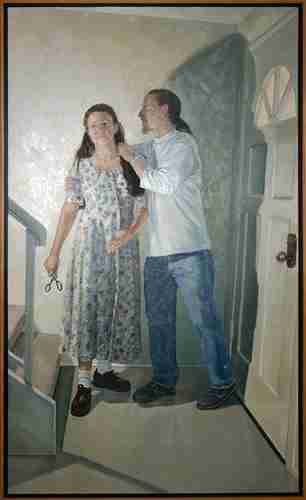 We lived in a townhouse in Costa Mesa at the time with my best friend, Jill. Erin came to our house and photographed Dave and I on the front landing. She had him hold me close, whispering in my ear as he held onto my hair. I was holding a pair of scissors, blade in hand. They must have been dull because I don’t remember them being sharp or getting cut.

We saw the painting a short time later at a show at the Caged Chameleon gallery in Santa Ana. We loved the painting but were pretty broke at the time. I can’t remember how much Erin was asking but it was more than we could afford. I was working for Wyland in 1994. A colleague commented that I could probably get a copy when she made lithographs. She didn’t realize that most real artists don’t mass produce their work.

We lost track of Erin over the years. We tried searching for her online but never found her until recently. Dave had book marked a page from Fullerton College with the faculty list. Erin wasn’t on there when he created the bookmark, but she was when he reviewed it a month ago. We had found her!

I emailed Erin and asked her if she remembered us and if she still had the painting. We were hopeful we could buy it or at least get a photograph. We were very lucky that Erin did remember us and wanted us to have it. We bought it last weekend, just in time for the 16th anniversary of our first date. It now hangs in our living room – a reminder of our early days.

The content of the painting is a bit dark, but that is what makes it great. It’s also a nice coincidence that Erin works at Fullerton College. We met there in 1990 while taking a summer life drawing class. She likely teaches in the room where we first met.

Here’s a photo of the painting.

In April of 2007, I received an email from the fiancee of Erin Scott. He had a remarkable story to tell of this painting and finding a lost love. He knew Erin from years before but had lost touch with her. He searched in vain for her online until he came across my post on my home page. Through my site he was able to track her down. It had been sixteen years since they had last seen each other, yet their paths kept crossing with near misses.

This time the timing was perfect and they are making a go of it. She moved to Switzerland to be with him. This is what she wrote to me, “Life is good and you unknowingly played the part of an angel.” Maybe things really do happen for a reason. If he had found her sooner, we may have never been able to find this painting. If we did not find this painting, he may have never found her.

I hope everything works out well for them and they are as happy as Dave and I have been.