I find sewing a therapeutic exercise. I’ve had a few hard blows in recent months, so I’ve been at my sewing machine again making things for friends and for the cats. 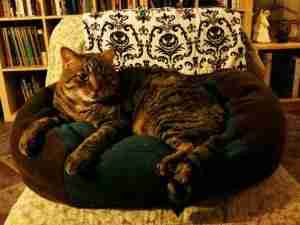 I made a cat bed last year that Wayne and Liv had been stealing from one another. When one would arise, the other would sneak in and steal the coveted spot. There were other beds, but they seemed to prefer this fluff ball. It is very large and meant for a dog or a dog-sized cat like Wayne.

I decided to make a few smaller ones for Liv and Lucian not knowing if they’d use them. Cats are ornery that way. They turn their cute little noses up at what is offered and choose your favorite sweater instead.

Luckily, the beds were a big hit. They wouldn’t stay in them at first, but when I wasn’t looking they decided to give them a try. It has to be their idea, after all. 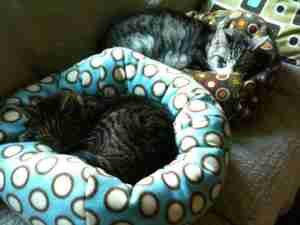 One cat bed has a semi-permanent home on the sofa and the other is on our bed, so Lucian can sleep in between us each night.

The weather has been cold for California this winter, so the cats are keeping warm in their new beds. As an added bonus, their fur remains concentrated in one area making clean up more easy. 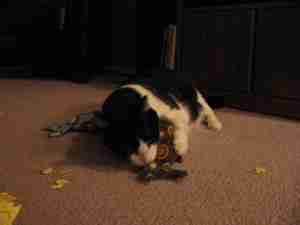 Dave suggested I use the leftover fleece to make toys for the cats. We have an old fleece fish that we bought years ago at Trader Joe’s. It used to be one of Lucian’s favorite toys. I used that as inspiration and made a few prototypes before coming up with a fleece fish, stuffed with fiberfill and a generous amount of organic catnip.

Did my cats like them? Sort of. They are really spoiled, so they liked them but soon went on to other distractions. However, I did make a few since they are so easy and gave them away to cat-loving friends.

Other cats loved them which made me very happy.

Here are a few comments:

Thank you so much for the catnip toy!! 🙂 All three kitties are having a blast!

Thank you so much for the catnip kitty toy 🙂  My girls loved it. I can’t remember the last time I saw Zoe get so into her toys that she’d give it a prey-shake. Bubbles got high in two minutes flat and alternately loved on it and then tried to gut it with her back feet. Really, as much as they liked it, the entertainment value for me was immeasurable 😉

Squeeky *loves* the catnip fish! Peanut too!
I’m afraid they are going to chew through it, but so far lots of licking and rolling on it and some biting. Squeeky carries it around. Bluto hasn’t noticed it yet. Thanks on behalf of the kitties.

Since they are so much fun to make and such a hit, I’m thinking of making more and selling them on Etsy with proceeds donated to a local animal shelter. Liv and Lucian were adopted from the Seal Beach Animal Care Center. They are fund-raising to build a new cattery, so that seems ideal.