Foam Rolling Away The Pain

I’m not sure why I thought my hips were forever fixed. Maybe it was because other than the scars and not being able to sit cross legged, I had no problems. The doctors had warned my mother that I might develop arthritis in my late teens, but when that didn’t happen, I thought I was home free. I could walk, run, play tennis badly, do yoga. I was without pain until I was in my late 30’s.

So for the past 8 years or so, I’ve been working to push off the gradual decline of my hips. I dutifully do my physical therapy stretches. I switched from a treadmill to a recumbent bicycle for cardio exercise. For the most part it works, until it doesn’t. Each winter, I get a little worse.

This year has been the first time it has affected my ability to walk or climb stairs without pain. Even my lovely sleep is interrupted by pain.

When I was beginning to despair that I wasn’t going to get better without surgery, I tried using a soft foam roller on my physical therapist’s recommendation. As the inflammation in the hip went down, sharp pains down my thigh became the replacement. Massaging the muscle helped, so she suggested it was time to start using a foam roller. 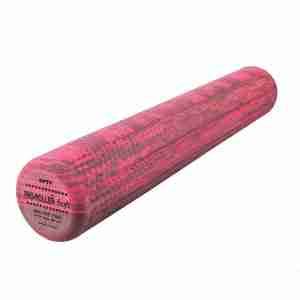 I couldn’t find a soft enough one locally, so I bought the OPTP Pro-Roller Soft from Amazon. It has been the best $40 I have spent. It was delivered on a Friday. By the next day, I could notice a difference. I was still in pain, but now I could roll out the painful spots. Each day is a little better and I now have more hope that I can once again get back to being mobile and active.

Here are a few videos I found that show some good techniques. Even if you are not in pain, foam rolling is a good way to relieve tension. I bought a second one for my office so I can stretch while taking breaks.