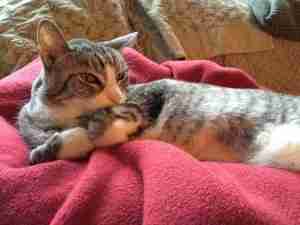 There comes a time in every pet guardian’s life when we have to say good-bye. We don’t like to think about it, but our companion animals’ lives are usually shorter than our own. I’ve had to do this three times now and each time it has been painful and heart-wrenching.

Our beloved cat Lucian became seriously ill on February 12th. He was diagnosed with feline pancreatitis or possibly pancreatic cancer. We were able to care for him at home by giving him pain medication, appetite stimulants, and anti-nausea medication. He responded well initially but started to weaken. Then the pain medication stopped being effective. We were able to give it more frequently, but even that didn’t help. The cancer diagnosis became more likely.

We had agreed as a family that we didn’t want him spending his last days or weeks in a hospital. He was 14 1/2 and we loved him greatly. He was our baby and spent all his waking time with us. The thought of being without him was agony, but his comfort came before ours.

We made the difficult decision to release him from his pain. Our friends had a positive experience with home euthanasia when they had to say goodbye to their pug. We found a place called Lap of Love, a hospice veterinarian. We called them, explaining Lucian’s illness. Dr. Erin Hogan was the vet on call. She was incredibly compassionate and agreed to come to our home when we were ready.

We were able to move Lucian gently downstairs on a fleece bed and blanket. We petted him, cried, and said our goodbyes as we waited for Dr. Erin. She arrived and gently explained the procedure. She gave Lucian a sedative which let his little body relax. His body immediately relaxed when his pain was gone. We knew it was the right decision. When we were ready, she shaved one of his back legs and gave him the overdose that would end his pain. We were able to sit with him and let the other cats come and sniff him to also say their farewells. She wrapped his body up in fleece blankets, gently placed him in a basket, and carried him to her car. We are having him cremated and having his ashes returned to us. She followed up with a card and an email to check on our well being, which was kind.

It was a gentle death that befitted our sweet baby. I miss him terribly, but I don’t regret freeing him from pain or doing this at home.

When the time comes for you say to goodbye, consider doing it at home. I was not present for my first two cats’ farewells and I regret that. I did not think I could handle it, and although it was hard, it was easier than doing it at the vet’s office. It was better for Lucian, better for our other cats, and better for us.

My friend, Jill, said it best, “I would like to go that way.”

← The hardest part of being vegan... Save 600 gallons of water per day by going vegan →